I’m a little puzzled by the recent article, “Canvas: Is it more trouble than it’s worth?” written by staff reporter Emry Dinman in the May 7 issue of The Watchdog.

I’ve taken a few courses since fall quarter of last year, taught by an instructor that was an early adopter of Canvas.  His utilization of the teaching tool has been impeccable, and I’ve had no issues maneuvering through his course site.  It was so much more organized than the previous system that I asked his permission to pass his name on to another instructor that was using a less stable teaching environment already in place.

When I inquired about Canvas, he informed me that there has been an on-site Canvas training environment in place for faculty members for the past several quarters, and it goes far beyond just a few “extremely tedious videos.” So I don’t know whom that “anonymous” instructor is that was quoted in the article, but he/she obviously didn’t have their facts straight.

Students have had access to the Tech Café in the N Building, but from what I’ve heard, no one has shown up to take advantage of the resource.  I’ve seen posters and announcements for it all over campus, including the media boards in the C Building where students seem to congregate regularly.

I recently spoke to a “green-minded” member of our campus Help Desk, who informed me that the printed Canvas pamphlets designed for students go untouched in the N Building.  He complained that since no one is using them, it’s a waste of paper.  For eco-minded students that dislike seeing our campus waste resources, this should be somewhat of a wake-up call on multiple fronts:  When a majority of our campus population is ignoring a resource designed for students to learn more about how Canvas functions, it’s a waste of resources that you all pay for. I would argue that if anyone is having difficulty using Canvas, then it’s really their responsibility to take advantage of the many resources available here on our campus, rather than making excuses and baseless accusations.

Letter to the Editor: White Privilege 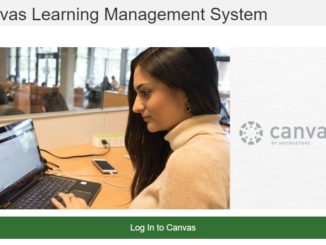