The Bellevue College women’s basketball team has “had its ups and downs,” described Coach Mel Stubblefield, but he continued to say, “the girls are playing as a team most of the time.”
His concern with their recent four point victory in the Feb. 24 home game versus Whatcom was that “they played down to their level, and to win big games they need to play up and play our style of ball.”

Sophomore Savannah Reid was sidelined last season due to a knee injury. Reid began to play this season following her recovery. “I feel very lucky to be playing with the group of girls that I am playing with this season,” said Reid.

She believes her team is improving every game as well as working harder. She also explained that through any situation, “we always manage to come together and come ready to play to every game.” As spring graduation approaches, Reid hopes to transfer to a four-year college and continue playing basketball.

Stubblefield praised the sophomores, saying, “They’ve done a good job. Individually, each one has grown in their own way and I think they kind of have that pride on the defensive end.” This is part of the reason why the Bulldogs lead the league in steals as well as having the fewest turnovers, with 350 and 327 respectively, said Stubblefield. Regarding freshmen, Stubblefield said that “it’s kind of hard,” when referring to how they meld the group. He partially credits himself because “one of the things that I preach is that we need to compete and that this is a long season.” He advised the freshmen to understand that they are now playing in a college league, which is longer than a high school season.

In regards to the team overall, Stubblefield believes “the whole team is filled with good qualities in their own individual way.” In addition, Stubblefield praised Erin Hamilton. “One player that doesn’t really get a lot of notice is Erin,” said Stubblefield. Hamilton is “a workhorse who busts her butt in practice and in games,” he described. Stubblefield also praised her attitude and said that “she’s a pleasure to be around, and very coachable.” Hamilton indeed leads her team in blocks and offensive rebounds this year with 25 and 68 respectively. With a 50 percent field goal average, she also leads the Bulldogs in that as well.

Heading into the last game, the Bulldogs are sitting at a 13-2 record in interleague play. This record puts them at second in the north region and they have secured a playoff spot in the coming weeks.
Men’s:

Bellevue College’s men’s basketball team also hopes to qualify for the playoff season. Coach Jeremy Eggers described his basketball team as having an “up and down season.” Going into Wednesday night, the Bellevue College men’s basketball team held a 14-win, 13-loss record with a 5-7 record in interleague play. Both of these net them the position of fifth in the North region with a .519 and .417 win/loss ratio respectively. When the interleague play began on Jan. 9, the Bulldogs  started with a six game losing streak. Afterwards, starting Jan. 30 with a 112-100 win over Everett, they continued on a five game winning streak to, according to Eggers, “get them back into a playoff hunt.” After another loss to the leading team, Peninsula College left them tied for fifth place. Because of that loss, the Bulldogs are in a situation where they need to win both of their final two games and have one of the teams above them, Edmonds or Everett, drop both of their games in order for Bellevue to secure a playoff spot. 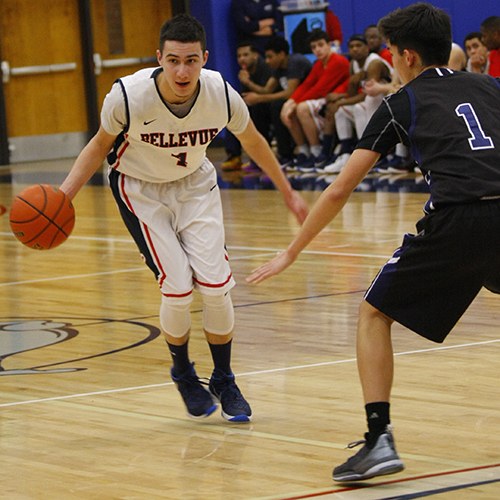 The Bulldogs have a roster with 10 new faces, nine of which are freshmen. Among the team is a single returning player from last year, Brian Zehr. As a rookie, Zehr scored 8.3 points per game for 28 games totaling 232 points over the entire last season. So far this year, in 25 games, he has upped his average to 11.6 points per game giving him 289 points overall heading into the Feb. 24 game against Whatcom. Along with the points, he also leads the Bulldogs in blocks this season with 19, and defensive rebounds with 122, according to the Northwest Athletic conference website.
Despite the current position of the Bulldogs, “our freshmen have done a lot of growing up this year and we are playing our best basketball at the end of the season,” commented Eggers. With the conditions for Bellevue to make the playoffs this year, he is also “proud of the progress of this team this year and the direction we are headed in the final two games of the season and into our off season.”