As of Feb. 26, the Women’s Basketball season has ended, not with a whisper but with two convincing wins against playoff hopefuls as the teams head into the upcoming championship tournament.

Olympic College put up a stout fight during the first half of their contest on Feb. 23 with the halftime score dead even at 32 points each. They even managed to start the second half strong, holding a 40-39 lead halfway through the third quarter. Guard Natalie Amos came up with back-to-back jump shots to give Bellevue a 43-40 lead and they never looked back. The Bulldogs ended the third quarter ahead 51-45 and put the proverbial nail in Olympic’s coffin with a 21-10 fourth quarter, presenting a final score of 72-55.

Amos’ two jump shots accounted for four of her seven total points that game, but forward Amanda Luckett stole the show. Her 20 points on 10-17 shooting led the team, adding four steals to an impressive game score. Guard Mo Bungay put together an impressive bench performance of her own, putting up a second-best 12 points with a game-high five steals.

Despite being out-rebounded 41-29 by Olympic, Bellevue still managed 20 more field goal attempts due to the sheer amount of turnovers they were able to force. Olympic committed a whopping 31 turnovers throughout the game, led by guard Isis Crew and forward Kaitlin Jewell who both managed seven. This was reflected in Bellevue’s impressive 22 steals in the game, miles ahead of their season average of ten.

Everett came to town on Feb. 26 as they held together hopes of retaining fourth seed in the region and making playoffs themselves. Despite a closer score of 80-66, the Bulldog lead was far more stable throughout the game. Bellevue outscored the Trojans in the first three quarters and tied at 18 in the fourth. The one ray of hope for Everett came less than five minutes into the game when Trojans forward Kelsey Mellick sunk two free throws to give them a 6-5 lead. Luckett responded with a jumpshot of her own, putting an end to the only lead Everett would hold that game. Bellevue coasted by the remainder of the game, building their lead to as much as 19 before settling for 14 points ahead by the final buzzer.

Luckett once again dominated the game, grabbing nine rebounds and three blocks in addition to her game-high of 21 points. Amos and guard Makenna Faulkner both fulfilled their supporting roles by scoring 13 points apiece. Faulkner hauled in seven rebounds of her own while Amos led the team with five assists.

Bellevue won in all major categories, including a 17-9 assist score and 9-3 block score. The real difference was in Everett’s 21 personal fouls. The Trojans managed an impressive 14-16 from the free throw line but the foul difference allowed the Bulldogs to attempt a ridiculous 30 free throws that game, as opposed to their usual 20.

With the playoff seeds decided, Bellevue will represent the second seed in the North Region in the NWAAC. A bounce back season is in order after they narrowly missed playoffs last year after a tie-breaker loss against Skagit Valley. An impressive defensive front led by Luckett’s dominance on the rebound will be paramount if Bellevue will want to stand up to some of the incredible competition, including the 28-0 Umpqua squad that dominated the south. 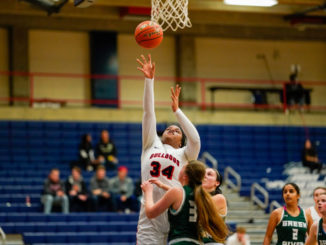 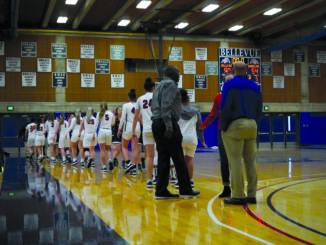