Bellevue Art Museum focuses its collections on the art of craft and design. Rather than showcasing fine arts, the collections exhibit a variety of artists who work in mediums that stem from processes that have had a functional aspect to them in the past. Current exhibits include textiles, wood work and crocheted statues.

The largest exhibit at the museum at present is called Counter Couture, a play on the counter culture revolution of the ‘60s and ‘70s. It contains a wide variety of clothing and memorabilia from the era that were crafted with a high level of skill and are prime examples of the time. 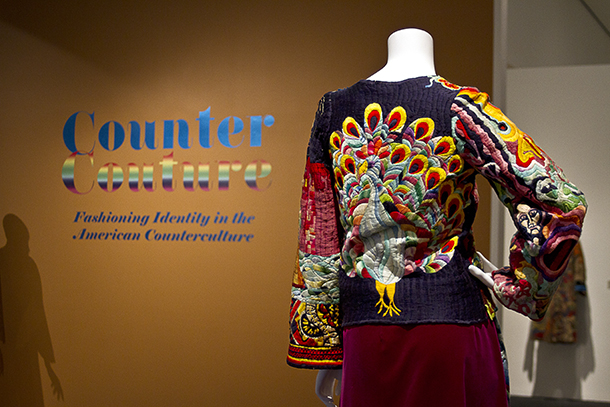 The period that the clothing represents was a time when many rallied against traditional values and norms. Young people were responding to the war in Vietnam and a movement towards civil rights and feminism. This cultural shift manifested in art, lifestyle, music, sexuality and, as this exhibit demonstrates, through fashion. Expressing oneself through fashion is “highly personal compared to, let’s say, art in general, where you might be painting a picture to hang on a wall. You can bring something of yourself into it, but you didn’t have to be an artist to produce it or to be feeling yourself part of the movement,” said BAM docent Bonnie Schiller.

While some of the garments were collected from California museums, many came from the private collections of artists themselves. Pieces were created through all types of crafting styles including tie-dye, painted cotton, crochet, applique and basic sewing. This mash up of styles and creative ideas resulted in an anything-goes fashion of all kinds of outlandish colors, textures and patterns.

The Counter Culture movement had a big focus on finding new and more peaceful ways of living and coexisting together. Many people were “interested in all of the folk cultures of the world,” said Schiller. The clothing represents this in the variety of patterns and influences. “There was an identity with people that were trying to live a very natural life. Not a life where they were buying merchandise that had been manufactured but things that had been handcrafted.” 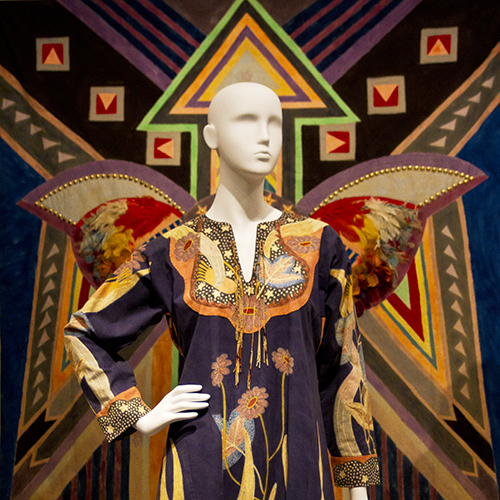 This exhibit will be showing until Jan. 10.

While crochet and toys may not normally be evocative of war or violence, Nathan Vincent uses both in his exhibit “Let’s Play War” at the BAM. The art piece features half life-size renditions of the plastic soldiers that have become a motif of American childhood.

Entering the exhibit room, the “toy” soldiers are arrayed in two groups in opposition, one camouflage green and one khaki. “Every day according to instructions he has left with the museum, these are moved. So any time you come back…they are not going to be positioned in quite the same way” said Schiller. The viewer is invited to question whether this situation is a friendly battle, or whether they are enemies. 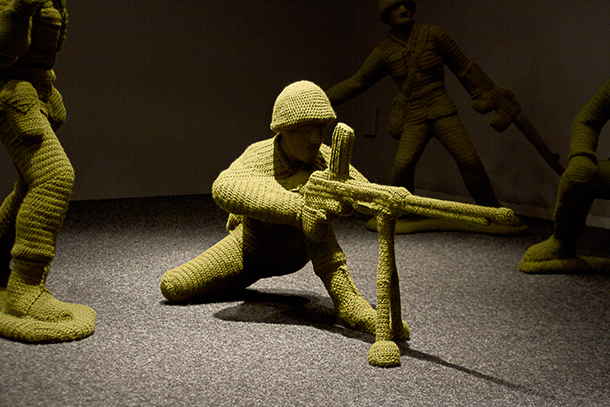 The sculptures were created through a 3-D scan of the original toys. This data was then laser cut out of heavy Styrofoam and wrapped with fabric strips that hardened as they dried. Epoxy was used to change personalize each figure, giving them each a unique facial structure. The final step was to crochet a skin for each figure. Each loop of yarn is precisely woven to detail seams in the figure’s clothes and distinguish between man and weapon.

The various elements of the art are intended to invite the viewer to question gender norms and the relationship between violence and play. Crochet is generally considered feminine, while weapons are usually associated with masculinity. Toys are meant to be fun and carefree, whereas war is a violent and very real tragedy for anyone involved. “The installation is trying to speak to the ideas of what makes up masculinity, but also how we teach it, how we are expressing it, and how these ideas get woven into the fabric of who we are,” said Vincent in the museum’s publication about the exhibit.

The last day to see this exhibit is Oct. 18.