A good coach inspires players. Players respect their coach as much as their coach respects them. By this definition, Jeremy Eggers is a good coach, but that’s putting it lightly.

After 20 years of coaching, Eggers has         expanded his reach to coach both Bellevue      College’s men’s and women’s basketball teams. This off-season he’s keeping both hard at work with two practice days and two open gym days a week.

So far with his new position, Eggers feels “this is a very good group of girls that with hard work in the off season have a chance to be really good next year if they all work hard and improve.” He said, “We need to get more depth in order for this women’s team to advance as far as they would like to next year.” He hopes to get his new team to work together to improve upon the last season in the off-season. Should this work, his team will be stronger.

Both teams have        responded well to the change. Freshman           Lorraine Pittmon, women’s             basketball player, enjoys that Coach Eggers gives constructive criticism. She also said, “he changed the plays in a way that we can understand and practice ran way smoother.” Men’s team player Reggie DC said he hopes the change brings the two teams    together and that the change “didn’t faze me much, he’s a great coach and lives for     coaching and his family.” Both players are hopeful for the future; they stated that Coach Eggers would bring their teams to the Northwest Athletic           Association of Community Colleges’ Championship next season.

“I am very excited to be coaching both programs and hope to continue the tradition of being successful both on and off the court with both programs. This is a great challenge for both of our staffs and we are        excited to begin the process,” said Coach Eggers, “This is a great opportunity for myself and staffs to continue to build two strong programs that will represent the college and ourselves in a strong way and we are excited for that opportunity.”

This year, Coach    Jeremy Eggers is losing three successful sophmores in his women’s basketball team who are graduating. Next year, recruits will be found. He will be training  his two  teams three times a week from the beginning of fall quarter with official team practices starting on Oct. 21. Next season’s games will be starting Nov. 15 for both the men’s and women’s teams.

For more information, Jeremy Eggers can be  contacted through email at jeremy.eggers@bellevuecollege.edu. 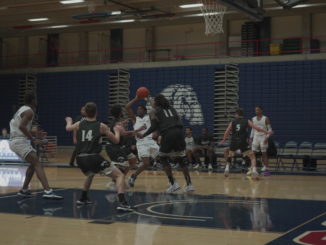