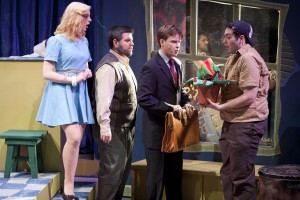 Suddenly Seymour gets some attention on Skid Row. Mr. Mushnik’s Garden Shop is in danger of going out of business until Seymour Krelbourn reveals a plant that he found in a solar eclipse.  As Seymour raises his extraterrestrial discovery in the public eye, he goes from garden-shop ‘nobody’ to a botanist celebrity sensation. He chases the girl of his dreams, Audrey, after whom he names his bizarre plant. When life finally winks in Seymour’s direction, Audrey II wreaks havoc on Seattle and Seymour’s own ability to make choices.

From March 6-9, the Bellevue College Theatre Arts Department presented their winter musical “Little Shop of Horrors,” composed by Howard Ashman, filmed by Roger Corman and scripted by Charles Griffith. Phil Lacey, the director of the play, portrayed a distinct vision of “Little Shop of Horrors,” enhanced by strong choreography. Audience members were ready to indulge themselves in the morbid comedy so familiar from the 1980s classic film, but did the department capture the spectators in the foliage?

The production was dressed to impress, with a two-story high stage, decorated to portray downtown Seattle in the 1960s. From the back row, it was great to see the overall look of the set. The design team evidently spent a lot of time painting, building and blocking the play.

The setting was changed to Seattle to make the play more relatable and entertaining for BC students. Jason Phillips, the Set Designer and Elizabeth Craswell, the Stage Manager, managed to build the world of the play, which significantly contributed to the production’s entertainment value.

As ridiculous as the plot may seem at initial glance, the actors and dancers pulled together for a performance that engaged the audience and earned sympathy for several, ‘pathetic’ and zany characters. Opening night-jitters were detectable when microphones cut out during critical musical numbers, but the actors stayed in character and moved smoothly from one scene to the next.

Allie Craswell, Hannah Coleman and Chelsea Moe were casted as Crystal, Ronnette and Chiffon respectively. The trio served as the show’s narration and were collectively the lynch pin of the entire production. They perhaps had the most intriguing choreography, blocked by Eva Stone, and by Phil Lacey for the rest of the cast. During the opening number, “Little Shop of Horrors,” the lower harmony lacked in volume, but the trio found their strength as the show progressed, a trend noticeable from the rest of the cast as well.

Danny Lacker, Elise Swanson, Michael Lacker and Maddie Dugan played Seymour, Audrey, Mr. Mushnik and Audrey II, respectively. Each of these actors was well casted in the lead roles. Danny and Michael Lacker, perhaps due to being brothers, had the strongest musical duets. They brought their character’s interpersonal chemistry to life on stage. Elise Swanson had great vocal projection skills, which resonated throughout the Carlson Theatre. Dugan amused the audience with her vocal characterization of a giant, vociferous plant. She was always in character; arms outstretched like vines, begging Seymour to “feed me,” none to nicely. Curits Gehlhausen cannot go unmentioned for his distinctive portrayal of Dr. Orin Scrivello. Using horrifying dentistry tools and dying by means of gas mask had the audience in limbo between hilarity and horror. Overall, the show improved as it progressed, with excellent stage design and choreography that stitched together the final product. The Watchdog attended the opening night performance, and it can ascertain that the production got better each subsequent night of performance. Fore additional information about the “Little Shop of Horrors,” or to check out the spring quarter productions, check out http://bellevuecollege.edu/artshum/drama/.

Sacramento and scholarships: Theatre students recognized at BC

Through the eyes of the director: The Last Days of Judas Iscariot